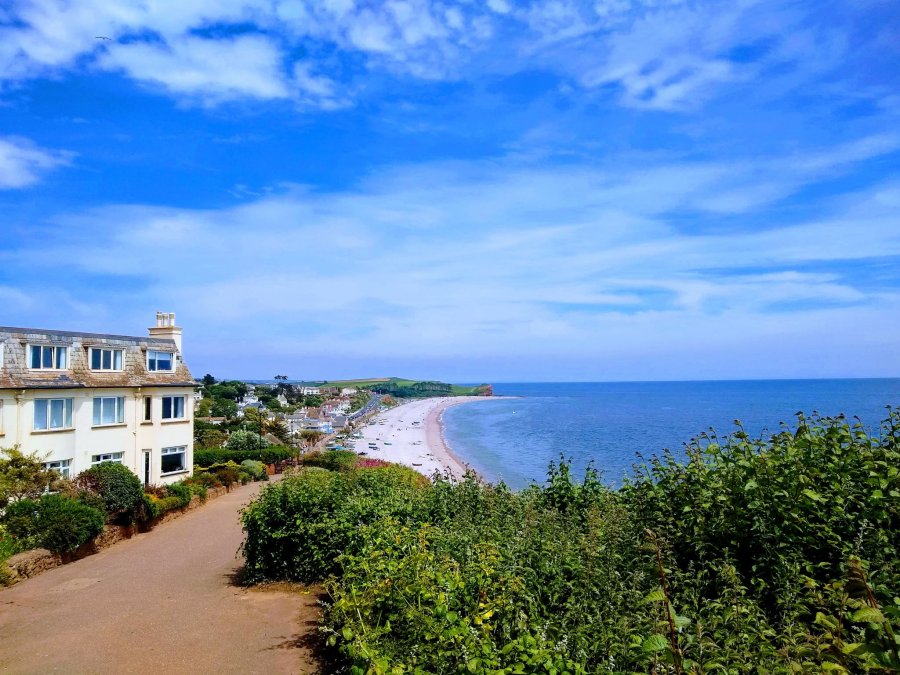 Well today we are venturing off to Devon for a long weekend. Last week the weather forecast said these four days would all be sunny and warm – but by the time we left they had amended it to mostly cloudy with some showers. I think we will rename them the ‘Works of Fiction’ (as another blogger we follow – thanks Eric).

Exmouth is the place we selected – on a campsite a little way out of town with the slightly odd name of Prattshayes –   it was a very friendly old farm. We booked a large touring pitch with electric which turned out to have water as well. The main attraction for us was not only the location but that the large barn is now a bar/club house (called the ‘Cow Shed’) where we could socialise with some of our neighbours.

There are a good couple of fields with a mixture of Motorhomes, Campervans and Caravans as well as many tents of varying sizes. The facilities are reasonable (going to be refurbished this season apparently) and the wardens are very friendly and helpful. 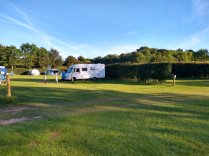 After getting pitched up we set forth on the 2Gs to the nearby village of Littleham where we found a couple of Pubs and the pretty Tythe Cottage Restaurant – lovely looking with a thatched roof.

I’ve been promised a meal out this trip and so far this looked favourite.

We trundled on to the Sandy Bay Haven Holiday Park which has a public footpath running through it which joins the South West Coast Path. We explored a small section of it and took some lovely pics of the cliffs below. 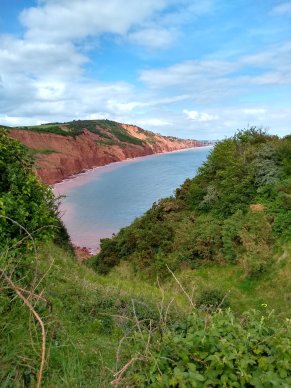 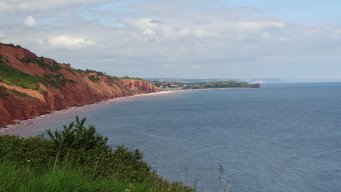 We did consider going a bit further but had been advised there were a couple of kissing gates (a showstopper for us) so returned to site using the pavements and lanes. 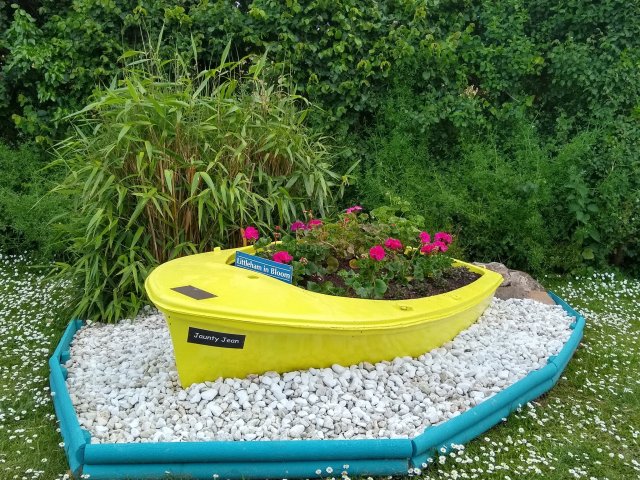 After our meal we spent a lovely evening in the Cow Shed having a drink and watching the kids running around having fun.

It rained a bit overnight and stayed very cloudy this morning with a very chilly wind – not what we were hoping for – but you have to go with what you get so after breakfast we set off for a trundle to Exmouth town.

After about a mile we were by the beach on Queens Drive and there were a few hardy souls braving it on the sand. 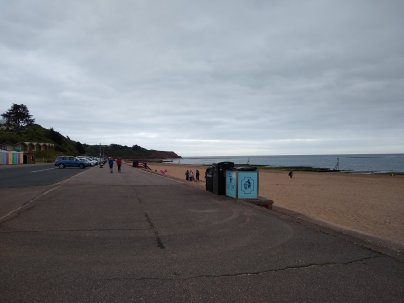 We progressed toward the town proper diverting off the prom following signs to Manor Gardens – it’s good to see some flowers. It turned out to be a pretty small park but worth a few minutes. 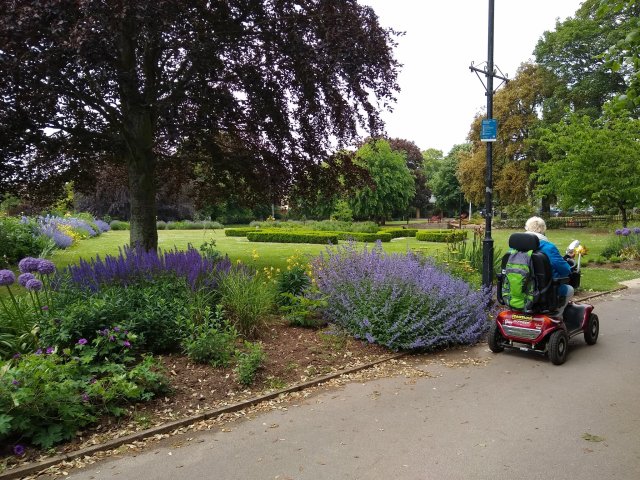 On to the centre where we found the usual stores as well a few independents but nothing exceptional. We explored a few of the back streets looking for any interesting architecture – a nice church but nothing else jumped out. 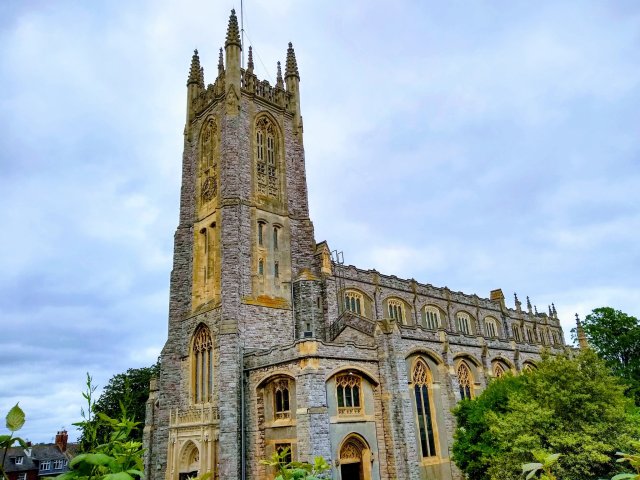 After an hour or so we decided to call it a day – may have been better had we not been so cold. So we just trundled back the way we came – got back to a nice warm Voyager. Had a nice lunch and a short siesta.

About three o’clock we noticed the clouds were clearing and the sun streaming in but it was still windy – we decided just to chill out.

Sunshine with just a few wispy clouds – now that’s more like it. I made a packed lunch while Nigel did the outside chores then we were off.

Goggle maps had shown a section of NCN 2 between North Littleham and the edge of Budleigh Salterton and we love cycle ways (especially old train lines because they are pretty flat). The path itself was mostly tarmac and had occasional views through the trees as well as some lovely flowers and bushes.

Some old bridges and odd brickwork where the only remnants from the line that closed in March 1967 (Beeching again).

At the end of the line we had another mile to get into town along good pavements. We had a look at the shops and then followed the signs to the beach.

We found an empty spot where we stopped and had our lunch with a lovely sea view an almost cloudless sky and the sun beating down on us – lovely. 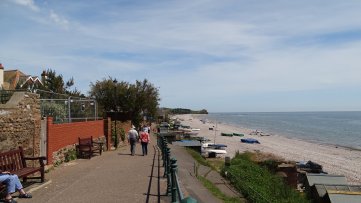 Then a further exploration along the prom 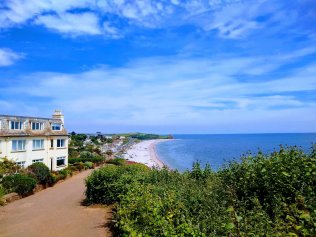 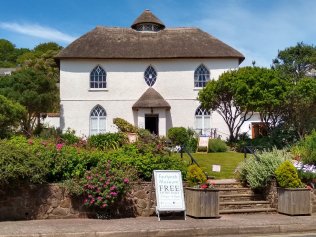 before going back along the High Street, getting a few things in the Co-Op and a rather overpriced ice-cream before heading back to Voyager.

We had a little rest then it was into my posh frock, Nigel his suit and off for a too rare night out. We had decided on the thatched restaurant and trundled off down the lane. 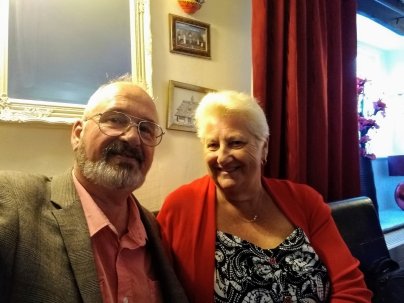 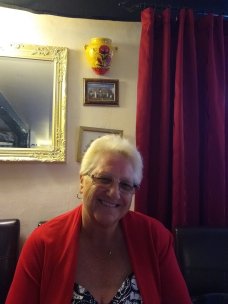 I’ve been so looking forward to a meal I didn’t have to cook myself but thought I’d play safe and just have fish and chips – Nigel opted for the Steak & Ale pie. Freshly cooked to order the menu said but we were both disappointed with what we received – freshly cooked oven chips and fish you get in a box from the freezer. Any ale in the pie had evaporated with no hint it was ever there. I think we will be finding a good Fish & Chip shop on our next trip.

We stopped in at the Cow Shed bar on the way back to Voyager – a couple of spritzer’s took the edge off my disappointment.

A restful start to the day today – due to the heavy showers. Typical British weather one nice day several bad.

After lunch we decided to just go for it so set off to Exmouth town. It was dry but still very windy and as we descended the hill to sea level we could see that the kite surfers where making good use of it. It was good to see but I don’t think I would have been brave enough to try it even when I was young and fit.

We progressed and found a convenience store where we bought ready meals for our evening meal (I was still feeling disappointed by yesterday’s fiasco and didn’t feel like cooking!)

We checked out a few things we had missed the other day before starting the return journey. On the way the heavens opened and even though we had put on our emergency ponchos we both got absolutely soaked. Back at Voyager we hung our coats in the bathroom and put our jeans around the heater (our airing cupboard). In warm dry cloths with the heating turned up we just chilled for the rest of the day.

Homeward bound today and guess what – the weather is glorious – Typical! 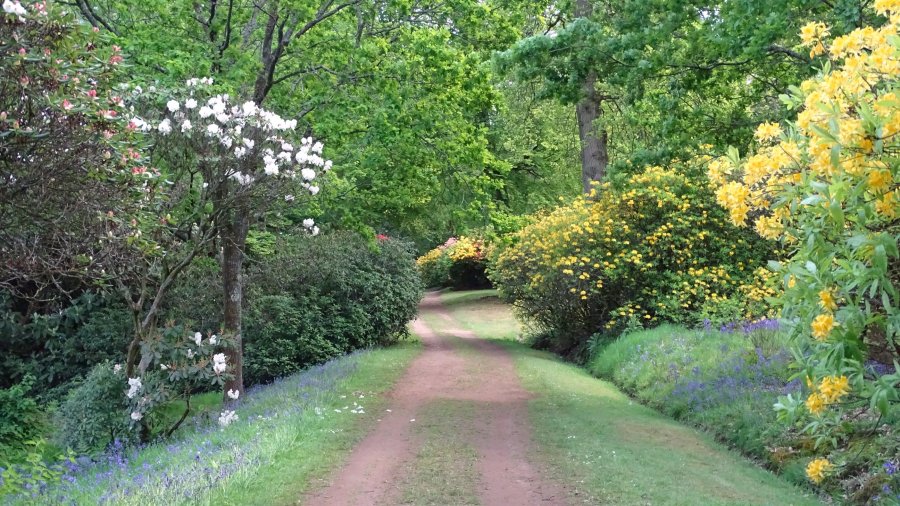 On a warm day in May we spent a relaxing couple of hours going around the Woodland Garden of Bowood House in Wiltshire.

These gardens are only open for a couple of months each year when the Rhododendrons are in flower – but they are well worth a visit. 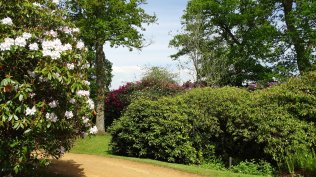 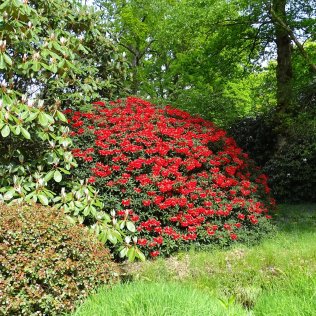 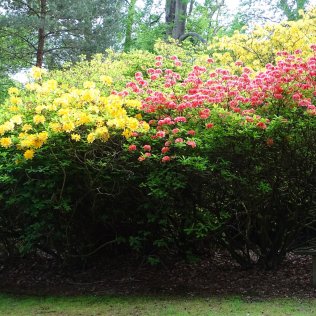 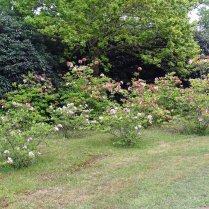 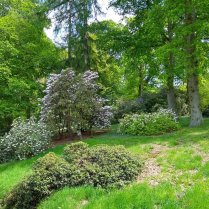