Today the sun has returned but not the temperatures we had a few weeks back (high of 18deg) so after breakfast and the chores we set of again on the cycleway but in the opposite direction to yesterday.

The trundle this way is more open with some wonderful views,

a bit scary looking over the edge.

We continued on and eventually got to Lydford – a small village with mostly old houses and in the oldest part a Castle and a Church. The Castle is maintained by English Heritage and is a typical Norman Keep built in 1195.

Unfortunately the gate was not wide enough for our scooters but we were able to get some good photos from nearby in the Churchyard next door.

This 13th century church has some good stained glass and some very useful booklets and postcards with an honesty box for payment. 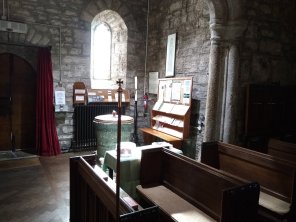 Nigel picked up a selection and took some photos for me to see later while I chatted with a couple we had as neighbours on the site last night and who had coincidently decided to visit Lydford as well.

It was just after 1 o’clock and as we had not brought a picnic lunch today we decided to try the Castle Inn just up the road. 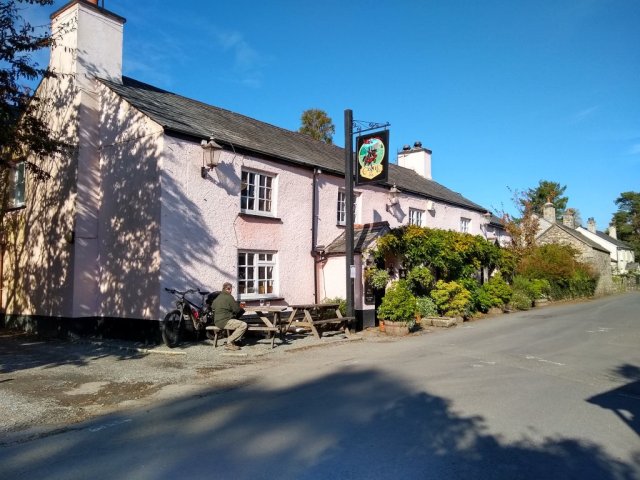 We parked the scooters outside and walked the few yards into their restaurant. A lovely old feel English Pub with a good selection on the menu.

We decided to have the home made wild mushroom soup.

We have been let down before with ‘home made’ food but this was indeed the real deal and probably the best mushroom soup I have ever had, really tasty and well-seasoned.

After our break we set forth following the signs to Lydford Gorge where there is an impressive waterfall. It is a National Trust site and for non-members the entrance fee is over £10 – as members we could get in for free had it not been for the fact that there is no ramped access – all steps in fact – some of which we could see from the road bridge we crossed.

It’s a shame but I suppose in a Gorge you will have steep sides that need steps – we will have to wait a bit longer to find a good waterfall that can be seen from our scooters.

We returned to the cycle way and made our way back to Voyager as by now it was getting much cooler in the shade and the six or so miles would take us about an hour to do.

With the hills we have done today Nigel’s scooter was starting to get low on battery power but we made it back OK. It looks like 2 years or so is what we can expect from our scooter batteries for the way we use them.

Voyager was warm and welcoming when we got back so while I prepared our meal Nigel cleaned and put the scooters away and onto charge ready for our next good trundle tomorrow.

Meal then TV and relax before bed.

Yet another sunny day so after breakfast and chores we were off on the 2G’s heading into Oakhampton, again using the cycleway over the Meldon Viaduct but this time continuing on past the station and quarry.

Following the heritage railway line and meeting more walkers and riders today – must be the sun encouraging people to venture out. On our way we saw a hawk in a tree – we stopped and got a photo 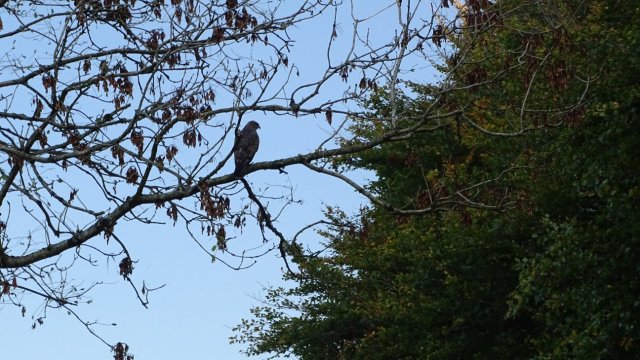 but he was too quick when he flew off so didn’t manage to snap another – he was big though and graceful as he flew to a tree further down the path.

We had to use a tunnel under the Okehampton by-pass (A30) which seems to be very busy all of the time. On we went and as we neared the town we found a bench by the path so stopped and admired the view of part of Okehampton Castle – taking a few photos.

The town itself is quite small and built in the valley between the rolling hills around it. We followed the signs to the centre where we found a few charity shops and independents with at least two supermarkets. We did a bit of shopping for fresh bread and fruit we were running short of before having a quick look at the Museum Courtyard and taking some pics of the Town Hall area. 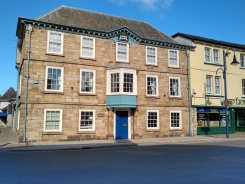 We had brought a picnic with us today so followed the signs to Simmons Park which we found to be a lovely little wooded area with good pathways alongside a fast running small river way.

We found a spot in the sun where we ate our sandwiches while watching young men erect a travelling funfair just over a bridge on what looked like a car park.

Then a further explore of the rest of the park – again the plants have started to go over but it would have been lovely a few weeks back.

Knowing that it would soon start to cool down we decided not to hang about but head back to Voyager. Up the steep hill to the start of the cycleway by Okehampton railway station which also has a museum which we left for our next visit.

On our way through one of the cuttings we saw movement in the ferns beside us and watched a fox climb the steep side only to disappear when it reached the top – it’s lovely to see the wild life so close while we trundle slowly along – you miss so much even if only cycling.

When we got back to the site we found a lot more Motorhomes and Caravans had pitched up while we were out and a few more arrived while we were sorting ourselves out and having our meal – the fine weather has encouraged them I’m sure.