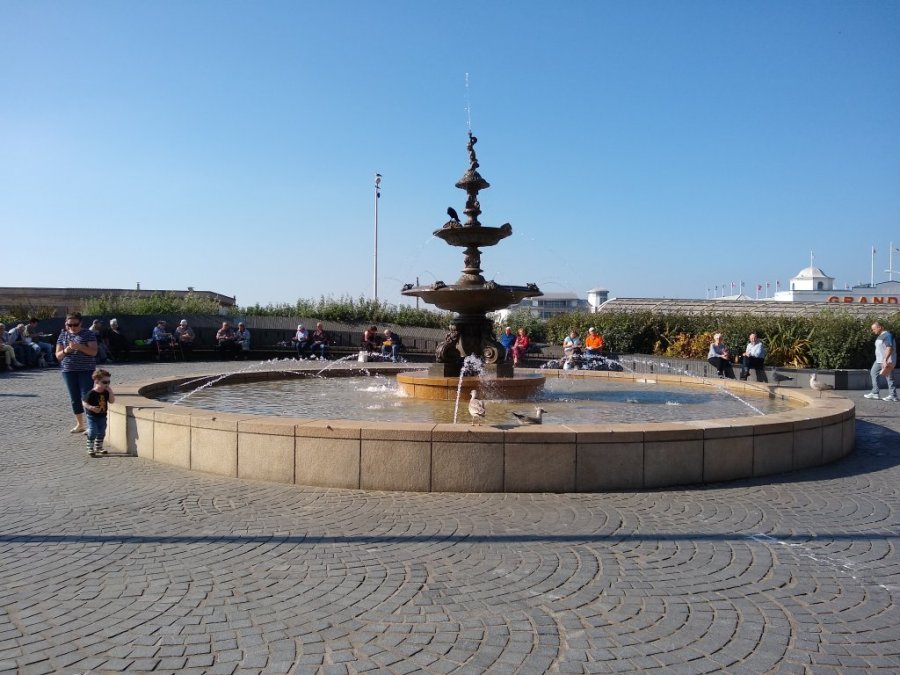 The forecast for today was being hailed as our Indian Summer ‘day’ – so Nigel and I decided not to waste it – a Day Trip to Weston-Super-Mare.

Now we know some residents of W-S-M are enjoying themselves further south – like Benidorm, Spain – but for today at least it looks like the weather is pretty similar.

I packed up a bit of lunch in the hopefully now repaired Fridge (today is its test run on gas) and we set off about 10.30.

A quick stop for fuel, then onto the motorway. The M5 southbound was a bit slow at times but at least it was moving today. We made it to our usual car park at noon. In fact the car park on the Beach is the only one which will accommodate us with Betty. We are too long for anywhere else. Today there was a sign saying that due to a high tide we must leave by 6pm and they had reduced by half the size of the parking area. We didn’t have any trouble finding a space big enough for us though.

Now a lot of people (including us in the past) have commented on the price of parking in seaside resorts. If you only want to stop for half an hour to look at the sea or get an ice cream then parking on the front looks expensive because its minimum is for 4 hours. With my Blue Badge I get an extra hour so for us now we are happy to pay £6 for 5 hours on a nice day.

Nigel got our ticket from the machine and then got the 2G’s out – he has that down to a fine art now.

So sun hats on we set off for a trundle to the Pier. Preparations for this year’s Hydrogarden Beach Race were underway (weekend of 19-21 October) – big sand moving machines and the construction of the temporary officials building was well under way. From the preview video on Youtube it looks like a lot of fun and I would have loved to have ago myself – if only I was forty years younger.

We headed back to Voyager for lunch. They were right about the weather (temp in the low 20’s) so we sat on our scooters on the beach, trays on the front and tucked into our olives and sandwiches. Nigel had an alcohol free lager while I had my special ‘lemonade’ – very civilized. We got a few glances but that’s OK – when you get to our age we put it down to others ‘jealousy’ even if it isn’t.

We had spotted a sign to Clarence Park earlier so as we went and checked it out.

It wasn’t hard to find – it is more green space than flower beds but there is a massive hanging basket display (past its best now but it would have been beautiful a few weeks back). 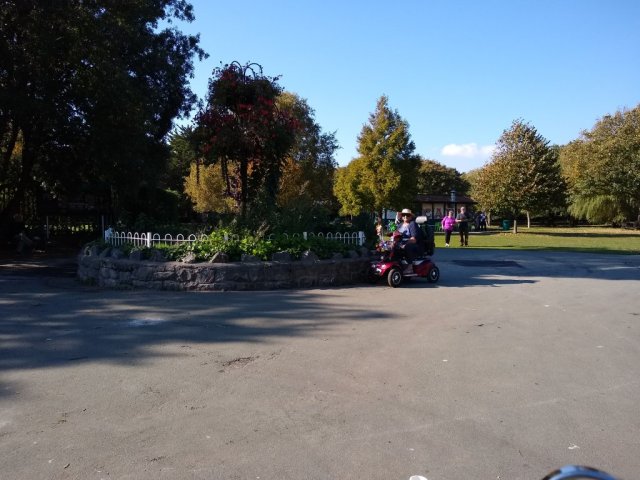 There were good paths, a childs play area, a fountain and pond. 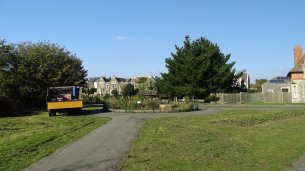 An old Victorian looking café – tempting but we had just eaten. There is a park lodge at one corner (now boarded up) upon which a Heron was perched looking down at the fish

in the pond – waiting for all the humans to move away so he could get his dinner no doubt.

(Wikipedia describe him as ‘an English astronomer, physicist, and mathematician of the early 20th century who did his greatest work in astrophysics.). I’m not sure how long that will stick in my brain but it peeked my interest for a while – hopefully things like this will hold off any slow slide into senility for a bit longer. 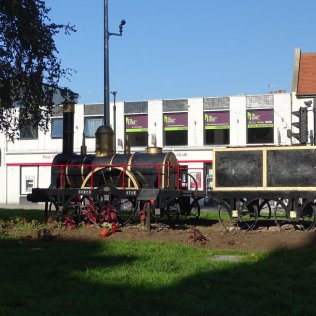 – and a Costa we had seen before but our different approach raised the question of what it was before it became a coffee shop – very art deco in design. 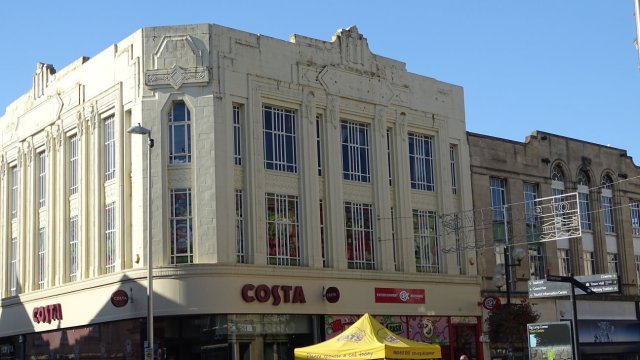 Nigel did have a quick google about it but couldn’t find anything. Anyone know?

Further on, back onto the prom to our favourite ice cream parlour – a vanilla strawberry mix whippy tub each – up to our expected standard – yummy.

Moving on we did notice that a team of young men were demolishing the sand sculptures – shame but we did get to see a few without having to pay. I did wonder if one of the lads was Alfie Two-Buckets but quickly realised he was too young – maybe his grandson? (You need to be a fan of Jean and Lionel to get that one!)

Is this Alfie Two-Buckets I wonder 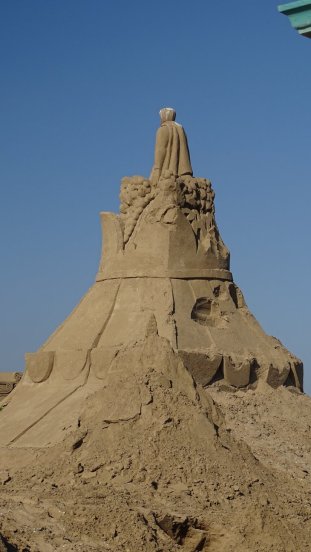 I suggested we go back to Voyager by way of the beach, but we weren’t sure so stayed on the prom for a bit. Then we saw a guy on a mobility scooter on the sand with no problems – so we got on at the next ramp.

This gave us a different view of the Tropicana

– it looks more like a fortress from the sea side, and a lovely view back to the pier as we trundled on the compacted sand. We got a big wave from the builders as we past them – I think they were quite surprised to see two old fogies trundling on the beach – we smiled and waved back.

Back at Voyager it was all too soon time to make tracks – we’d had a lovely day but were both tired out by the time we got home.

Oh and the fridge ran fine on gas for the few hours we were there so Nigel is going to complete its refit ready for our next little expedition – to Devon for a few days next week.

2 thoughts on “Our ‘Indian Summer’”