The last time we were away (Churchill weekend) we were pitched very close to the site Reception. This would not usually be a problem but this site has a very bright Security light that was on all night (usually these are movement sensor controlled) and it shone right into my window.

which can be a little irksome during the summer with dawn arriving about 4.30 – an all-night security light was even worse.

So it kicked me into making curtains that would cover the whole window. Sewing machine out and this is the result. 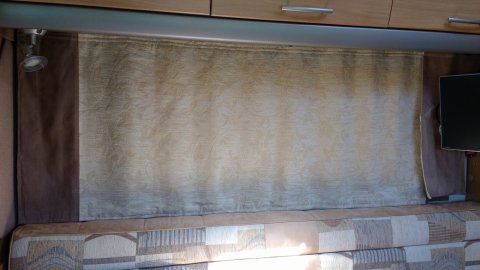 I still need to sort the tie backs though.

Nigel has also been busy. When away on a tour we have found that Laundrette driers are not very efficient (well for the money/time we want to use them for anyway). We have used the Truma heater area beneath the bench seat as our ‘airing cupboard’ which works well but there are a lot of other bits you need to be careful of in there.

So now we have an adaption of four Wilko’s ‘Baking Cooling Rack’s’ fitted so the clothes we put in there can’t get where they shouldn’t.

Just a few more things to do before we are off again – ‘Hermanfest’ meetup this coming weekend.