We are still at the Atlantic Holiday Park but what a contrast to yesterday – now we have rain but it’s not too cold yet.

We needed to get a bit of shopping so after breakfast and the usual chores it’s off to Lidl (just with Voyager and the wheelchair) for mostly fruit and veg.

We then went and checked out the harbour and beach – the tide was out again though so not very exciting but it looks a nice little place.

We have some new neighbours today – a young family with toddler and dog using a yellow van conversion towing a bright yellow trailer with the look of Del Boys three wheeler. We watched from the warmth of Voyager as he erected a quite large tent on the next pitch – Scot of the Antarctic came to mind – hope it is warmer inside than it looks.

We had Slimming world meatballs& sauce with pasta – didn’t have too much as not that hungry – but it was tasty (although have added Worcester and Tabasco sauces to the shopping list for next time). Nigel fell asleep while I was cooking but he did do the washing up after so I forgave him.

I started my Fairy cross stitch while Nigel videoed himself fitting the cab cover on Voyager. He then edited it – put an intro and speeded up the action, adding music. For a first attempt it was pretty good – he posted it on our new YouTube Channel https://youtu.be/1xSYYbn-lww and I shared it on Facebook – it got a couple of likes from friends.

Well we had a bad night – Voyager got cold – the gas heating kept erroring. Nigel is a bit worried about it – he got cold in the night but he only had his thin duvet on – I’m using my thick winter one so was OK. He was up early looking at the bottles and regulator mechanism. I tidied up inside and during breakfast we discussed what to do for the best. As snow is forecast for later in the day we decided to top up the gas bottles and dig out the fan heater we use for frost protection when at home and checkout how good heating only with electric is. I remembered from John’s driving days that gas freezes and as the heater is fed by the gas pipe that feeds under the van we thought that might be the issue. It did get very cold overnight – froze the outside water tap – so we kept trying the gas as it warmed in the day – it began to get better – so we reckoned a bit of pipe lagging may help.

After breakfast we went to the local Shell garage – filled the diesel as well the  Autogas – then onto Asda for a few things. Needed to make sure our evening meal could be a one pot wonder in case we only had the single electric ring available. I’m very glad Voyager is duel fuel for both heating and cooking.

We returned to the site had lunch and as it hadn’t started snowing (yet) we went for an explore on the scooters. It was bitter – very cutting wind that made our eyes and noses run – but we braved it as far as Gwithian beach (which is one end of St Ives bay) took some pics. It seems to me that surfers are even madder than us – or is it right that the sea is warmer than the air at this time of the year. 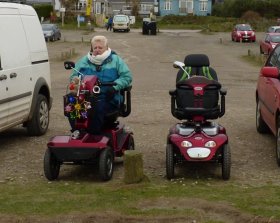 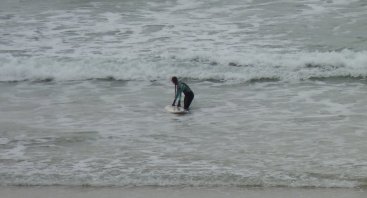 As we returned the snow flurries started and by the time we got back to the site there was a light covering. Nigel couldn’t settle – still worrying about the gas. Tonight’s meal was last nights sauce with Asda cooked chicken added (as well as Tabasco & Worcester sauce). I might have added a bit too much spice but it was very nice. TV for the evening (Sunday is currently the best viewing of the week).

We awoke to a white scene still with the biting cold wind. The BBC news informed us that the A30 was closed between Bodmin and Exeter with a lot of stranded drivers having taken shelter in a college in Okehampton. The recommendation by Police was not to travel until later in the day. We decided to stay at Hayle for an extra night before moving to Looe tomorrow. Reception were happy to take our money for the extra night. 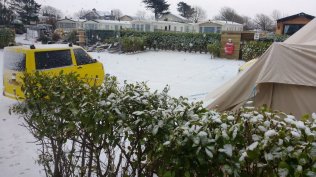 It became clear the gas problem had got worse overnight – luckily the electric heating had worked a treat – lovely and warm throughout. We had to boil the kettle for coffee on the electric ring as now there was not enough gas getting through to run any of the hobs.

Nigel had found a Motorhome service garage just outside Hayle so we phoned them early and arranged to visit after breakfast. They said they were very busy but would try and squeeze us in when they could.

We left the site at 10.00 and found the roads to be almost clear of snow so no issue getting to Thomas Auto Tec in Connors Downs. They were very friendly and found us a place in their car park. We did have to wait for an hour and half before an engineer was available but he quickly confirmed our diagnosis of a faulty regulator. Very luckily he also found he had a new one in his stores so it was all fitted within twenty minutes. Ten minutes for the admin and we were on our way (£90 poorer but very happy).

Did a bit more Asda shopping (mostly fruit and veg) then on the way back to the campsite we spotted a ‘Bargain shop’. We turned into their car park and then noticed the height restriction. It stated 9’ 8” but it had a bar hanging on 6” chains. We are 10’ but Nigel reckoned we could make it with a bit of rubbing of the bar. It sounded dodgy as we passed beneath – probably looked worse from outside – but we got in and went into the shop. We didn’t find the wall clock we were looking for but as is usual we found a couple of things we didn’t realise we needed.  I asked the young girl on the till if there was anything good to see in Hayle (in case we had missed the must see something) but she said she didn’t know as she was from Camborne. I quoted that famous line of Jethro’s “The train don’t stop in Camborne on Wednesday” her reply was “Doesn’t it?” Nigel and I did laugh – Cornwall’s most famous comedian and the younger generation don’t know his work.

The snow had almost gone entirely by now but even so tomorrow will be better for travel and warmer according to the forecast. So afternoon chilling (appropriately) I did some cross-stitching, Nigel did a wash load in the site laundry, researched better video camera’s (with stabilisation)  and some blog work while the machines worked.

Meal was pork with loads of veg – all SW friendly. I’m looking forward to a good night’s sleep – to make up for the last couple of bad ones.

We had a much better night – slept better and it was warmer both outside and in. This morning the sky was blue again and the bitter wind had disappeared – spring like – and temperatures to match.

Nigel fried up some sausages for breakfast and possibly a sandwich at lunchtime – I did the scrambled eggs – he can do them but does tend to over salt – so I prefer to do them most of the time.

We had no travel issues – stopped for lunch in a lay by near Dobwalls (or Dog Balls as Nigel calls it) with nice views across the fields. Just a little snow left around some of the hedgerows.

We followed the directions to our next site but didn’t go straight there – carried on the extra couple of miles to Looe itself. We parked in a large car park (coincidently spotting one of our neighbours from the last site there as well) got the scooters out and spent a good hour going around the small centre. Nigel bought a cake (I didn’t – being very good) and we looked at the various shops. Found a nice fridge magnet and a couple of postcards at the ‘Old Lifeboat’ shop. We noticed a lot of plaques about extoling the virtues of Joseph Thomas who was responsible for a lot of the improvements in the nineteenth century. He designed and built the Banjo Pier as well as the Arches and Turrets that hold up the new road he built to get out of the village. 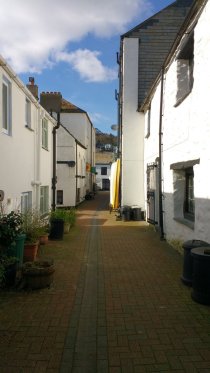 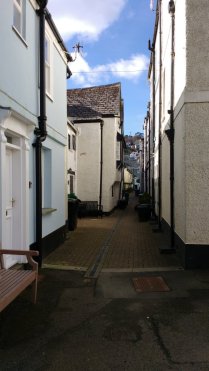 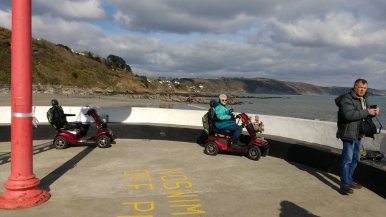 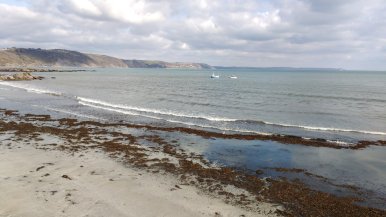 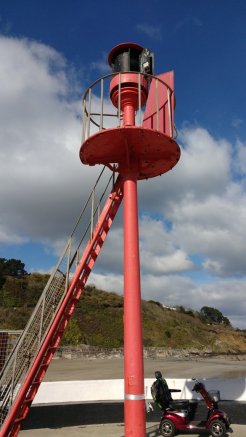 The ice-cream Nigel was hoping for was aborted as it started to get a bit chilly –  but we did note a couple of restaurants that might be good for a meal out tomorrow or Thursday – by Taxi from the site.

We got to the site with no problems (luckily not meeting anything on the single track access road). Nigel had booked a grass pitch but we upgraded to hardstanding as we were told all the recent rain had left the grass pitches very soft. As we arrived a day late they didn’t charge us any extra.

Meal of roast chicken and re-heated veg from last night. While it was cooking we sat and watched the beautiful sunset we can see from our window – tried to get a photo but doesn’t show it as good as it was.