After we woke this morning we found that Voyager had done well to have practically dried out.

Nigel took the washing to the Laundry to wash and dry.

The rest of the day was a complete wash out – it didn’t stop raining at all. So I did some sewing and Nigel worked on the blog. He also did some research on Ebay about getting a sign to use as a marker when we leave our pitch for the day. We have seen some other Motorhomers leave them – anything from an ‘In use by Motorhome’ to one looking like Santa with the van reg on it.

Nigel did the meal tonight – Spanish chicken with rice – Very nice it was too.

And the rain persists.

Well after all the rain now it is sunny but it is windy. Just when we are moving on. Mind you we didn’t find much to see or do at Woodall Spa not that we looked too far with it only being a few days and our other experiences. This stop had been primarily for family visits but that didn’t work either – well maybe next time.

The drive today is a long one for us so we have decided not to stop at any attractions on route – just to do the necessary.

Our first stop was in Lincoln for fuel and another larder and freezer restock then onward until Newark. We thought it was time to stop for lunch – good idea but the next two laybys were full of large articulated Lorries – presumably their drivers were having breaks as well. We did find one in the end and lunch was lovely.

We pressed on for another two hours to Northampton – the Billing Aquadrome site. It is a large site combining touring pitches, static holiday caravans and owned holiday homes as well as some purely residential park homes. The guy on the gate gave us our pack and directions – unfortunately Nigel missed the first turn and we ended up in the middle of the site totally lost. Luckily a passing site worker in a large 4×4 showed us the way.

We were on a field called Puddle Duck – it’s kind of how we felt the other evening and sort of sums up a fair bit of this trip.

While Nigel is setting up I get going with the meal – tonight it is Shepherd’s Pie with green beans. I have just realised I have not been outside the van for two days (shopping doesn’t count).

The scooters are out of Betty and had a good wipe down. Their mats are still sopping wet so are pegged up to drip dry. Everything looks good. 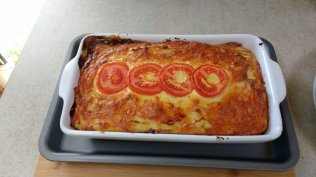 So time for some fresh air and explore – the sky looks clear but we are taking no chances now – the skylights are all shut and emergency ponchos are in the scooter backpacks.

We are next to the river Nene and there is a lock just by us. We can see the barges going up and down. A little further into the site there is a large lake with swans and ducks. There is a ‘site supermarket’ like a SPAR shop of our youth – a little bit of everything but all at the highest prices. We bought ice creams and ate them while watching a heron preening itself and then fly off chasing another of its kind the other side of the lake – it didn’t want any competition for food I guess.

There is a new build swimming pool complex near the site entrance. ‘The Venue’ is where you can get food or just have a drink on the sun decking area. It looks pretty good but didn’t appear to be open passed about seven in the evening. I guess it will be when the school holidays start – when the place is fuller. There are adverts for a ‘UB40 Tribute band’ on Saturday – kind of glad we will be gone by then – must be getting old.

Back to Voyager for a good night’s rest.

Today is a better day weather wise – just a few wispy clouds but mostly clear and no rain.

After a good breakfast we decided to go to Castle Ashby Gardens – it’s not too far to drive – just up the road.

The house (which is not open to the public) and gardens were really nice.

The family that live here have a long history. You can see from the lake that Capability Brown had a hand in creating the garden. 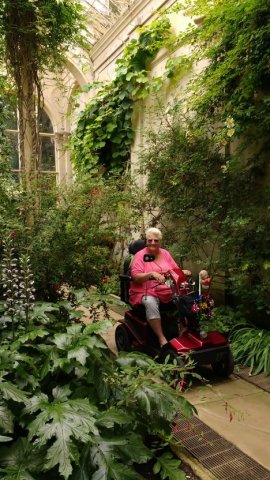 We followed the path through the arboretum walk which was lovely – some very old large trees here. 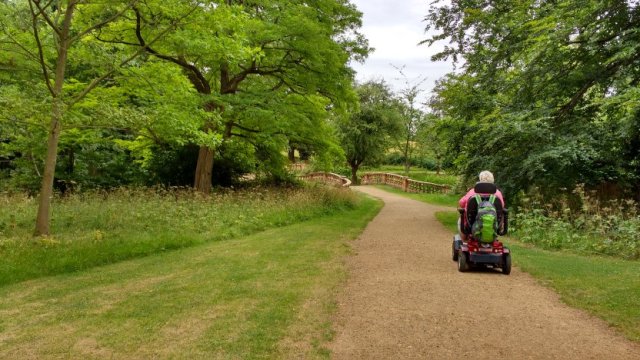 Back into the garden proper past the Italian garden – very formal – through some long boarders that look like they are being re-done – or maybe the modern fashion of leaving some areas for the wildlife. If you ever wonder what to do with an old tree this is worth a thought.

We found the small menagerie with Meer cats, Guinea pigs & rabbits etc. Nothing too exotic except for a few Marmoset monkeys one proud mum with her two babies crawling all over her.

It was lovely couple of hours – well worth the money.

It was such a good coach park here (we generally use them because we are so long with Betty on the back) we had lunch. Normally we try and avoid eating in Car Parks.

When we got back to site a few more tents had appeared – Puddle Duck seems to be mostly tents with only a few having electric – we’re a bit too old for that type of camping.

We decided to have a fish & chip supper from the Billing Chip shop. It was very popular so while Nigel queued I was checking the people who clicked ‘like’ on our blog. We are surprised we have readers around the world – we thought two oldies in the UK would have very limited appeal but Canada and USA as well as India, Ireland and even Denmark and Finland appear – thanks to you all.

After eating we went out on the scooters – further exploring along the river bank, past another lock seeing more of the park homes – some really well maintained and others not so. Swans seem to think they own the place nesting right next to access roads. The mums very protective of their fluffy off spring. Nice to see as long as you don’t get too close.

All in all a very good day – completed watching the TV with a glass of wine.

This is our last full day and we have a choice of where to go (one National Trust and one English Heritage). Both are about 25 miles away but in opposite directions – both look interesting so we decided to leave it to a coin toss.

It was tails – so Kirby Hall & Gardens (EH). For such a short journey it is surprising how many bad drivers you can see. We also hit a queue which delayed us by about 30 minutes as we crawled along for just over a mile – and the problem was – a 50m coned off lane just before a roundabout. No evidence of any work being done at all – very frustrating.

When we got there we found a partly ruined manor house – it had been neglected for many years but English Heritage have started to renovate the great hall and some rooms in one corner. 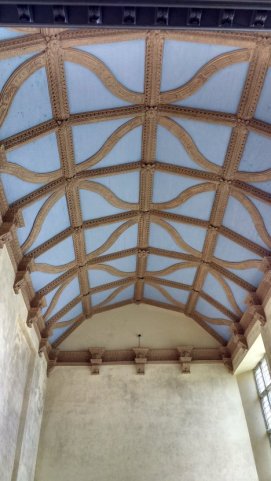 It was very interesting to see what it would have been like in its day. The gardens are set out very formally and there are several Peacocks roaming free in the grounds. The boys had full tail feathers but weren’t showing – we think the ladies were not interested. 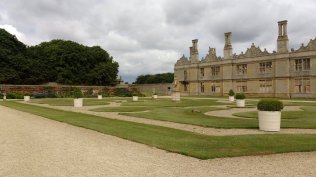 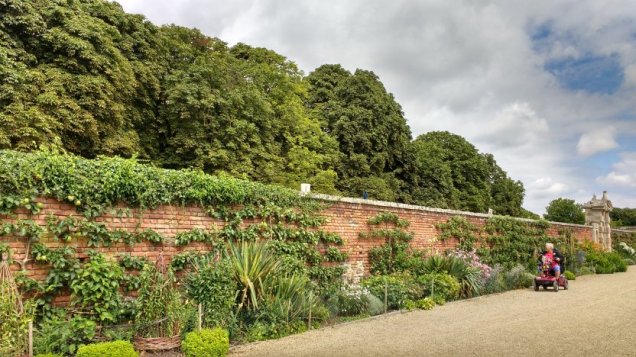 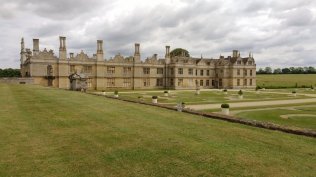 The journey back was un-eventful except that Nigel took the wrong exit on a roundabout because he was concentrating on the cricket on the radio and not the sat nav instructions – oops. Luckily just an about turn at the next roundabout so not a big deal.

After getting sorted and pitched up we decided to go out again on the scooters – I think Nigel was after another ice cream – but he didn’t get one because we found a Chinese restaurant which seemed very popular with the locals. This is generally a good sign – so as we haven’t had one in ages we studied the menu and then ordered a takeaway. The pork chops we had defrosted will go back in the fridge for tomorrow.

We scooted quickly back to Voyager and really enjoyed this treat.

There are even more tents, trailer tents and a couple of Motorhomes that have appeared today – lots of young kids around – some better behaved than others. I think we will be glad to be going home tomorrow, but on the whole it has been a good last day.

Today we go home – the weather is cloudy and there is some rain in the air.

The kids were up early so I think it’s good we are moving on.

It’s also the British Grand Prix weekend – our route home would normally take us pretty close to Silverstone so we have decided to go a slightly longer way but hopefully not have any congestion – well that was the hope. We were in no real hurry to get home – I will be washing and cleaning when we get there – but it will be nice to see how things are in the garden – suspect a jungle of weeds.

Anyway we did avoid the racing fans which made us feel good – unfortunately we did not know about the Stow Cotswold Festival taking place today in Stow on the Wold – a two mile queue slowed us to a crawl for 45minutes – but hey hoe – we are still on holiday – for a couple more hours.

Time to start planning our next get away.