Well its weigh in day today – I stayed the same and Nigel put on a couple of pounds which is OK – we are still on target.

The rain is coming in hard today so after breakfast another secure pack and the usual waste emptying we drove to the Bowes Museum in Barnard Castle. I have to say it is a very interesting place to visit on a very wet day. It’s also fully accessible to wheelchairs so we had no problems seeing the entire displays over three floors. There were all sorts of things to see and learn about. Josephine Bowles was a forward looking women.

She discovered she and her husband couldn’t have children so she endeavoured to fill her time collecting and filling the house for the public to be able to see. Her idea was that they would live on the upper floor. Neither her or husband lived to see it completed but they left money in trust so that it could be finished. 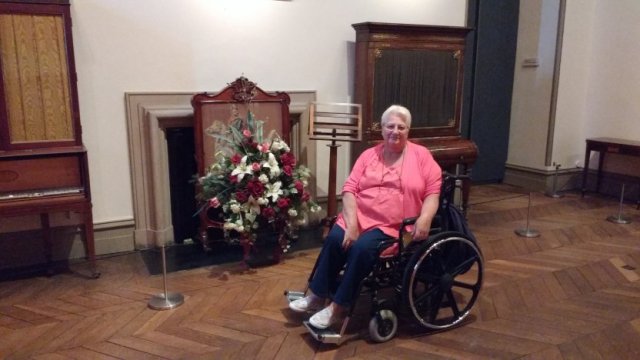 The gardens are also lovely but today we only looked at them through windows – from the second floor you can get a fair view of the front formal lay out. 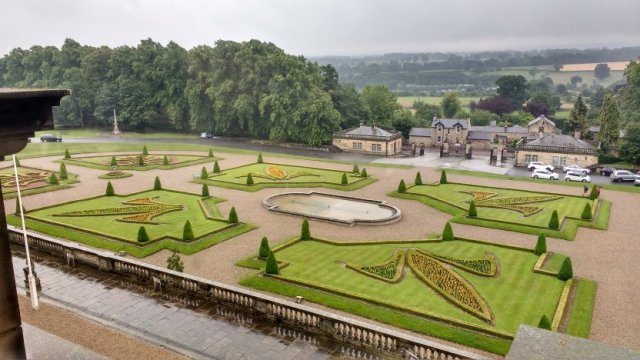 We stayed about two hours which for us is good for a museum. On the way back to the site we saw a Police car with blues and two’s going – he had to wait while we crossed the single width bridge as our pulling over would not have helped him.

Back on site and it looks like a few people have left and a few more have arrived – It seems to us that most campers only stay on a site for three or four nights before moving on – we are doing the same so are obviously fitting in with the crowd all ready.

It’s still raining on and off but Nigel keeps saying ‘It’s brightening up’ mmmm we will see.

We had dinner and settled in for the night – watched the kids running around and playing – they don’t seem to mind the rain – but then I guess we didn’t when we were young.

And it was American Independence Day – didn’t see even one alien though.

We woke again to the bl**dy wet and misty rain. We weren’t sure what to do but Nigel has worked out a circular trip with a couple of possible places to stop if ‘it brightens up’. Just took the wheelchair.

Breakfast of poached eggs, bacon and mushrooms – we are trying to be good and always start the day with good intentions.

Anyway I put all the names into the sat nav and off we set. Now sat-navs are wonderful things but they can be a bit literal sometimes. It got us to the middle of the first village and then told us to turn around and go back the way we came. It was getting Nigel a bit confused especially when it sent us down a very narrow lane, over some small bridges only to take us to a dead end where it told us to turn around. We resolved to ignore some of her odder instructions and continued on.

We came to the Yorkshire Dales – there was a big sign welcoming us – I wasn’t too concerned. There were some nice views – we could see the mist clinging to the tops of the high hills – made it look a bit eerie. 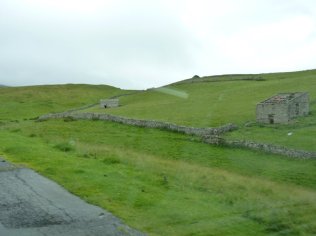 When Nigel said we were going to the top I must admit I was a bit worried. It wasn’t too bad at first – I was happily taking photos – then we began climbing higher and it was only a single track road with passing places. Luckily we didn’t meet too many cars coming the other way. The scenery is amazing – we saw sheep and goats at the side  and on the road, were passed by a couple of quad bikes one having a couple of working dogs as well as what we assume was a modern day shepherd off to tend his stock. 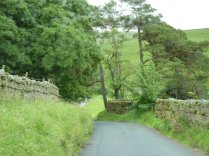 We drove through small villages, very neat little hamlets – all with stone cottages.

One thing I have learned today is that the Yorkshire dales are not flat but it was lovely to follow the River Swale running through the valley.

We stopped for lunch a bit lower down – a layby with a nice view – and had beans on toast with egg. It was nice to be able to stop and have something warm on a cold and damp day. 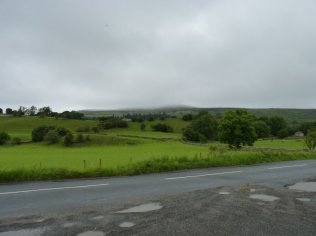 Still it was a lovely drive really – Nigel said I was very brave – I said ‘You ain’t seen my knickers yet’. lol.

We got back to Barnard Castle and went to Morrisons to stock up for the next few days. Then back to site and dinner of steak and chips. We were just sitting down to eat when the Fish & Chip van turned up – still we stayed on plan and the steak was delicious.

We spent the rest of the evening relaxing and watching TV with the windows closed – the farm down the road is a bit smelly.

The weather wasn’t too bad when we got up Nigel said he slept till after eight and that his alarm didn’t go off. It did though and I turned it off – he didn’t hear it – just slept right through it.

Anyway we thought a light breakfast of scrambled eggs would be OK as we need another secure pack – moving on again today.

After the usual tasks we are off – just took a couple of pics of the squirrel that has been visiting us most days – its only a grey but it is nice to see. 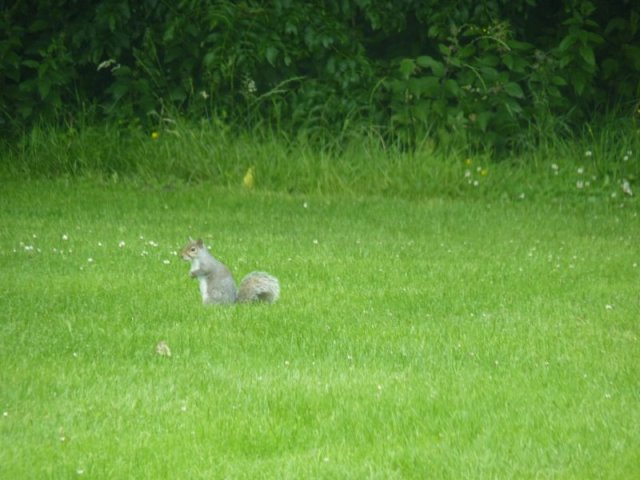 Nigel had planned the route so we could take a short detour at Middlesborough to see the Transporter Bridge – the one that featured in Auf Wiedersehen Pet – (for our younger readers that was a TV series about Northern Brickies taking a bridge to America).

We headed on – found a layby at the top of a hill where we stopped for our lunch. While there a man stopped by us (we thought he was doing the same as us) but he got a couple of baskets of pigeons out – he sat with them on the ground for a few minutes then released them. Homing pigeons I guess. A little while later as we were leaving a white van turned up and did the same thing. It must be a northern thing – I will say that neither of the men wore flat caps. The birds looked amazing as they flew off in formation. 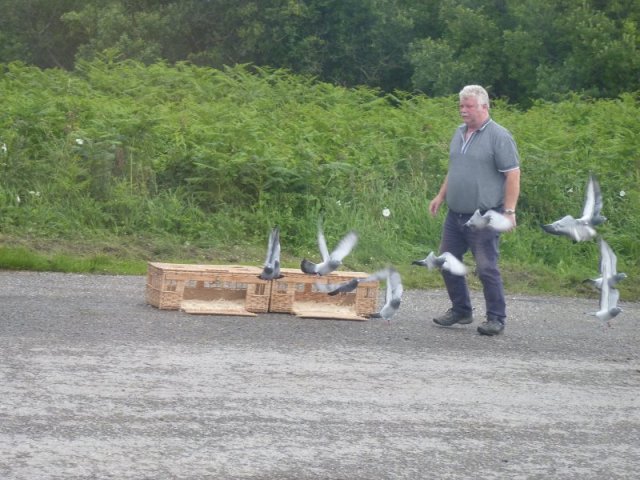 Whitby was our next stop – we found a place to park in the Coach Park. Off on our scooters for an hour – Nigel was after another ice cream. There were a lot of other people about (not suprising really as it was a nice day – and at least two of the coaches parked must have had school kids on summer trips) it was hard getting along the pavements. We took some pics, bought a fridge magnet and small gift for our neighbour as well as getting some salad stuff for our evening meal. Then back to Voyager and onward to our next site in Scarborough.

The sat nav got us very close but we still managed to miss the sign for the site – realised a few yards past it – we could see all the campers through the trees. We had to go another mile before we could turn around – but it was OK – we got to see how we would get to town on our scooters.

The weather was OK – cloudy but dry – as we pitched up. We decided to check out the site gates we were told off (as well as the local Carvery – an option for our next meal out). We were only out for half an hour but it started to spit with rain so got back and packed everything away. The thunder and the odd lightning strike were about as we did. Then came a steady rain. I shut all the windows and sky lights – the real rain started and we looked out as the roads became rivers and the flatter parts of the field became lakes.

All this water gave me the urge but my visit to the bathroom reminded me that there is another sky light in Voyager which I hadn’t shut – I’m so glad it’s above the shower tray – but it still took a while to clear up. Won’t forget that one again.