We woke this morning to more blue sky with the sun out – lovely.

We had breakfast of mushrooms, bacon, fried potatoes and scrambled eggs. After the washing up we do another secure pack – getting very used to it now.

Today we are leaving the Railway Inn site. I set the sat-nav for Morrisons Darlington which is the recommended place to park to visit the ‘Darlington Brick Train’. Handy really as we needed to restock the fridge and pantry while there.

The drive was OK (a bit busy around Gateshead which surprised us as it was Sunday) but it didn’t take too long. We did the shop first, using the wheelchair then got the scooters out and went looking for the train. You’d think it would be well sign posted but we managed to leave the car park in the wrong direction and had to go around the back of Morrisons through a small industrial estate until we found a gravel path. Then onward through what could be good if it was better maintained – nature was trying very hard to reclaim it. Didn’t quite need a machete but it was close in places. Anyway at the end of the path we found the Brick Train – it was worth it – even went to the top via the rough path. Took some lovely pics. There is a plaque telling you that David March designed it – and a poem as well. 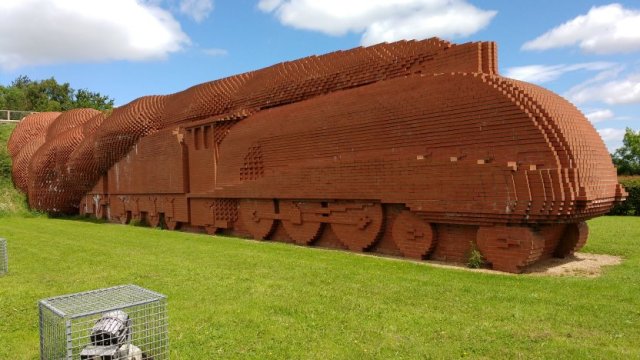 As time was getting on we decided to lunch in Morrisons car park – just in case you thought Nigel treated us again (funny).

We headed on to Barnard Castle – the weather seems to be better the further south we go although it is very windy. It’s no wonder they have loads of wind turbines up here.

As we approached a roundabout during the drive we think we may have added to the roadkill figures as we saw a little weasel run across in front of us and then turn round and head back for the verge – Nigel thinks he made it – I’m not so sure.

We got to the site about 3ish (after turning into the wrong campsite a mile or so down the road from ours – apparently this happens a couple of times a day so we are not the only ones to get it wrong). As the weather is good and windy we did our washing and hung it on the communal rotary line. 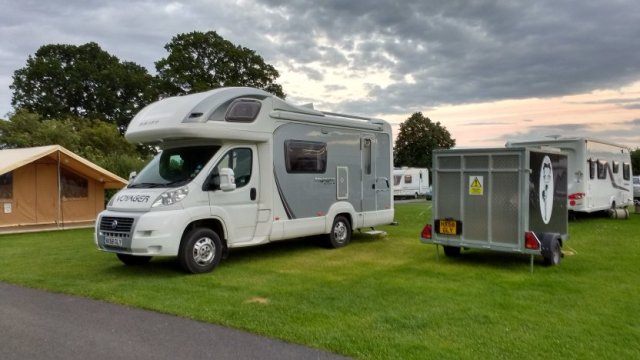 We then had our evening meal of Spanish Chicken pasta. Nigel made it for us and very nice it was too.

There are a lot of campers pitched here – it’s a very busy site (90 pitches). It was amusing to watch a couple putting up a tent beside us with the wind doing its best to prevent them – Man against the elements – they succeeded in the end but it reinforced our decision to not get involved with tents or for that matter awnings.

After dinner Nigel went and got the washing – it was nearly dry but we have found we can pack it around the water heater and it will finish it off.

TV then bed – this holiday lark is so tiring.

Our first full day here – it has been raining on and off all night but after breakfast it started to brighten up.

Its Monday again – we did the washing yesterday so it’s big clean day for Voyager. Total strip clean of the bathroom as well as the lounge kitchen area. Then after that it had to be shower time.

Now you would think that we would have learned by now to check the cleaning times – but no we arrived at the shower block half way through its closed time. Oh well we are not really in a hurry – we are on holiday so nothing is going to phase us. Well nothing until we returned 15 minutes after they were supposed to be open again only to find the showers for those able bodied were open but the disabled was still locked. It was a further 15 minutes before we could find one of the staff to get it opened.

Next time we use the camp showers we will get in early. We never have this problem with our own shower – in fact the only problem we have had with that was when I was getting changed in the bathroom and I accidently turned on the shower – I looked like I was ready for the wet T-shirt contest when I emerged – I had to forbid Nigel from taking a picture.

When we arrived at site yesterday Nigel picked up a sheet detailing a picturesque walk to Barnard Castle using Rights of Way. He asked if it would be OK with our scooters and was told there was one short section that was very steep so would not be. In the past we have done many things on our scooters that we have been told we can’t so we decided to give it a try any way.

The tarmac road to the Farm yard was great. The tractor track between horse fields was OK. The first 50 yards on the trail through the woods was OK – just a few tree roots. But then we came to the steep bit – I’ll tell you if I was fit enough I wouldn’t even go down it on foot – maybe on my bum at a pinch. So we turned around and went by way of the road to the Castle. That was a lovely little journey as the road was not too busy and was wide enough for cars to pass easily.

The Castle is English Heritage so no charge for us – good to see the old Towers and a recently added Sensory Garden within the walls. Great that it was very accessible for our scooters. 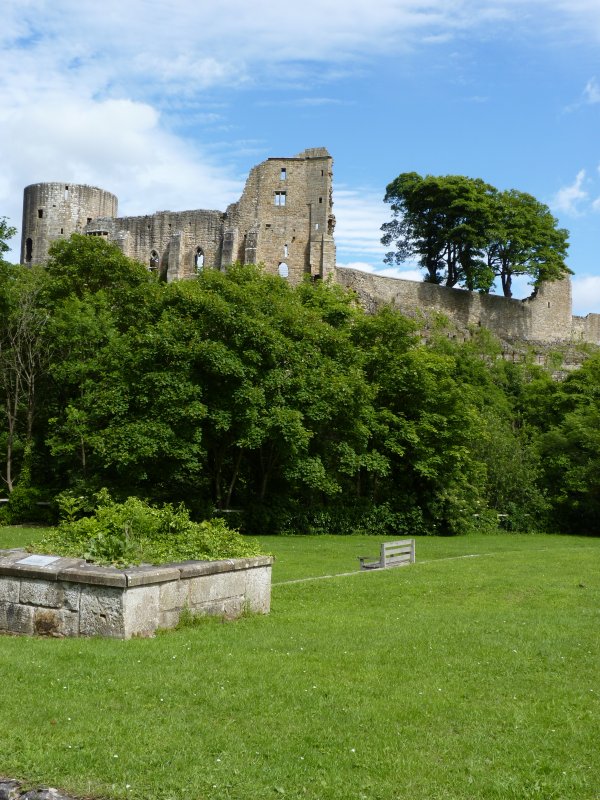 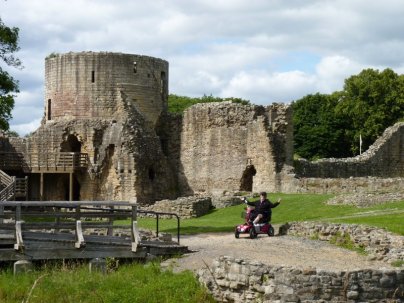 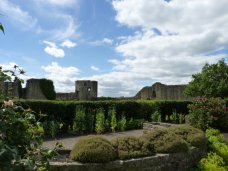 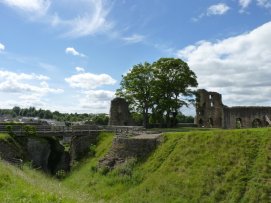 We had a look around a bit of the town – did a bit of shopping, just a few odd things. 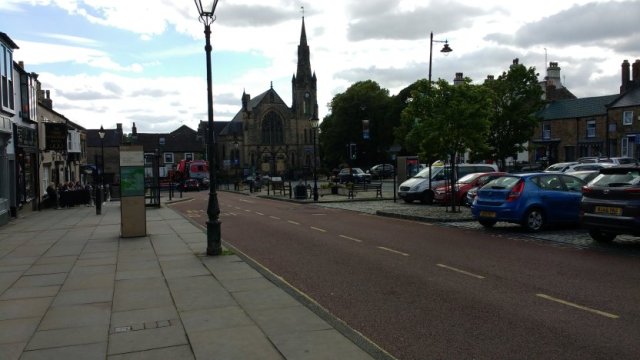 I was a bit worried on the way back as my battery was getting a bit flat when going up hills but with a little help from Nigel pushing at the rear we got back OK.

For dinner I did roast pork – it seemed to cook really quickly – it might be I’m getting used to the cooker and the timings.

We had a couple of new neighbours today in the Ready Camps (family tents) two families with young kids. They did run around a lot but the noise wasn’t too bad.

We spent a relaxing evening – it has been a lovely day.