Well it’s the start of our second week and what a difference – when we left home we had brilliant sunshine with an afternoon temperature about 32C – today we have heavy rain (puddles everywhere) with forecast temp of 14C. I guess it must be summerJ.

Breakfast over we both weighed in – Nigel seems to have lost 5lb (how with all the goodies he’s had) and me 1lb. Still it is a loss and on holiday as well. Slimming World does work!!

We are off again so another secure pack-up – Nigel got on the waterproofs and wellies and we set off around the site one way system to empty the toilet cassette and grey tank then hitched up Betty and we were off.

Our route took us around the edge of Newcastle so did a slight detour and stopped at Morrisons. We refilled the fridge. Then onward – we stopped for lunch in a layby on the A1. Even with the levelling pads down you still get shaken by the fast passing Lorries. Still we had a nice warming bowl of Mug-shot (and a cream desert for Nigel).

We got to the Railway Inn site about 3ish – it is a small site (only 22 pitches) and not busy. We chose pitch 14 (Nigel checked there were no trees blocking the satellite this time) and we got everything setup. 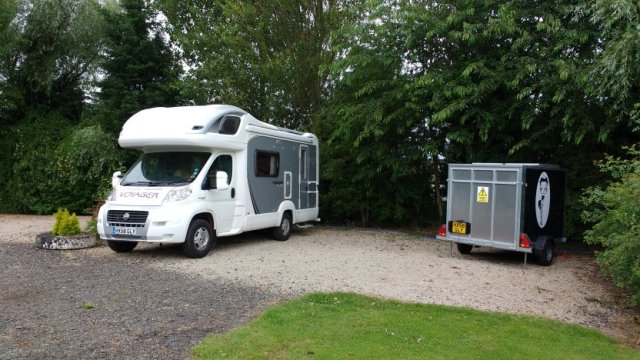 I will tell you that when we got here I did have a little nap (about an hour) leaving Nigel to his own devices. He did get the toiletries out in the bathroom as well as the TV sorted and the iBoost logged onto the pub free Wi-Fi.

We were not surprised to find a road and Railway track beside us but I knew it wouldn’t worry us as we are sleeping so well.

I cooked our Posh meal tonight – Steak, chips & mushrooms. There was meant to be sweetcorn but I forgot to dish them out so was still in the saucepan. Still we both enjoyed it.

The rain continues so it is a night of TV and computer.

We had another good night’s sleep. Nigel made breakfast of scrambled eggs and coffee.

Even though we are staying for 5 nights at this site we did a secure pack and hitched up Betty and travelled the coast road. South at first to Newbiggin-by-the-Sea – a small port but was the third biggest in its day. We parked OK and dollied to the promenade. Have to say it was very cold and windy but then we are on the North Sea. We did go into the Maritime Centre – very interesting Lifeboat and fishing museum (and warm too). Nigel did scout it out first – making sure I could get around easily with the scooter – we’ve learned from earlier experiences! 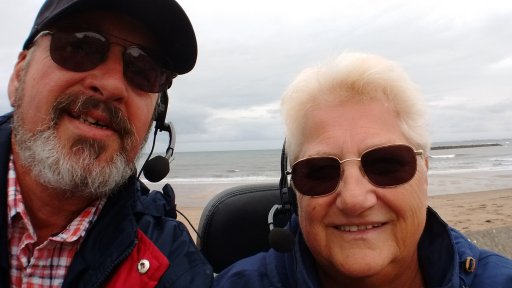 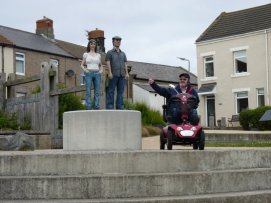 We left there and went north on the coast road – stopped at Druridge Bay Country Park for lunch. We parked in the ‘Water Sports’ car park (one canoer and several dog walkers) and I made an omelette of ham cheese and tomato, followed by strawberries and yoghurt and of course Nigel had his chocolate cake bought in Newbiggin.

We decided to drive on to Seahouses where Grace Darling saved the people on a sinking ship and hence started the RNLI. We didn’t stop as it was late and cold so leaving this for another day – I would like to dolly around it. Progressed onto Bamburgh where we could turn around (only took pic through cab window today) and then back to the Railway for our dinner. The trip back was bumpy as the coastal road is in very poor condition not unlike many roads in Britain these days. 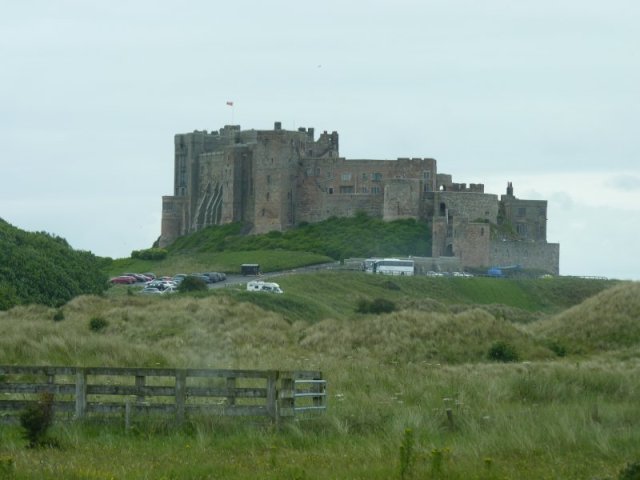 Not much to say about today – the rain hasn’t let up all day so we have stayed in – bit of cross stitch, bit of Kindle games, watching day-time TV – Nigel has done some laptop work.

The forecast for tomorrow is a little better but we have thought of a circular (roughly) route we can drive with various things to see if the weather permits – else it will be photos from the cab with the heating on.

Not what we had hoped for so for a little more fun we have decided to put our glad rags on and eat at the Railway restaurant – no cooking or washing upJ. Nigel went over at lunchtime (while I was making the bacon butties) and got the evening menu – no surprises, just the usual fare of most pubs these days – Steak, Gammon, Chicken etc.

It turned out to be very nice. Nigel had the Hunter’s chicken and I had the fish & chips – all served hot and with no long wait – for afters we both had the homemade ice cream, then espresso’s. Hopefully there wasn’t too many syns involved.

We didn’t stay too long in the pub – it was very quiet – we took a few pics and a couple of selfies.

I think I did rather well – I walked the 50 yds over to the pub and back.

Nice evening watching TV when we got back.

Well at least it has stopped raining – if not sunny.

Nigel had worked out  the postcodes for our route which I duly input into the satnav and we set off – only we turned the wrong way out of the site – it was 3 miles before we could turn around –  oh well you live and learn.

Our first stop was Cragside House and Garden (a National Trust estate) we parked in the coach park (we are nearly 32 feet long with Betty on the back). The things we wanted to see were well spaced so it was a good thing the scooters were fully charged. We had a fare bit of climbing to do and it would have been nice to see the views from some of the vantage points but the mist and low flying cloud did restrict it a bit. 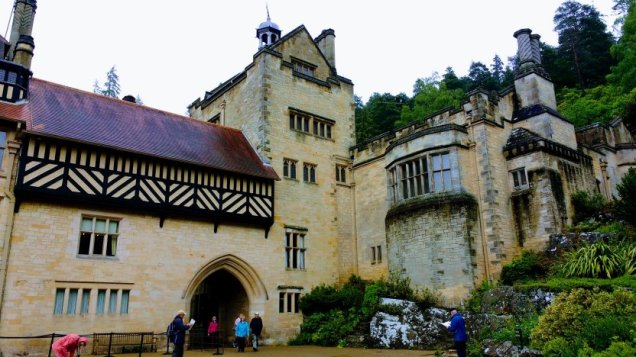 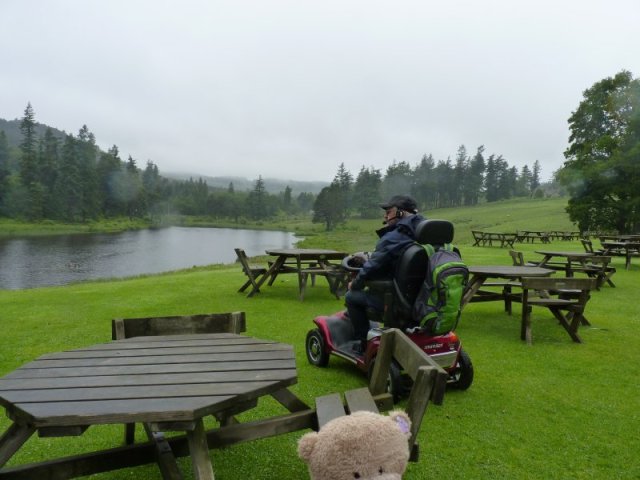 The house and garden were lovely but not all accessible to us. We did think we could go around the house on one of their wheelchairs but we found they would be great for a child or frail old granny but there was no way I could fit in one comfortably. So we skipped that – had our lunch, a warming mugshot before moving on.

Our second place was Chesters Roman Fort near Hexham. We couldn’t get to walk too close to the relics because they are fenced off (sheep deterrent) – they had kissing gates which are great for able bodied but no good for scooters. We did dolly around the outside of each of the enclosures and could see all we wanted to. The site included a short section of Hadrians wall so that item on my bucket list is now ticked off. 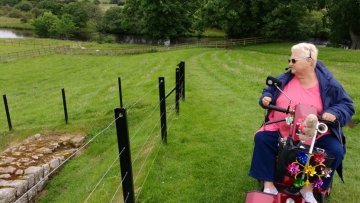 We didn’t make it to our last place (it got too late) so decided to leave that for tomorrow.

The last stop on the way back was to Morrisons Morpeth to stock up (Nigels wine supply had evaporated apparently).

We spent the evening watching TV – nothing unusual there then.

We woke up today to find the sun shining – it makes such a difference when the sun is out.

After breakfast, cooked by Nigel’s deft hand, we were off to see Belsay House and garden (English Heritage). It was a bit of a drive and unfortunately all for nothing as the car park was very small and there were already a lot of people there. The overflow car park was in an adjacent field and looked completely waterlogged. Being cautious we drove out again.

We drove back along the coastal road and stopped at Amble. We parked in a free Car Park, overlooking the sea, had a sandwich for lunch, then set forth on our scooters. 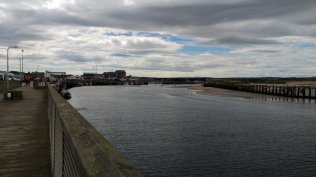 Amble is a nice little fishing port. It was rather windy but the sun came out now and again – enough to encourage us to have an ice-cream (doesn’t take much really). We found some little huts selling hand crafted items but they were too expensive for our tastes so we didn’t even buy a fridge magnet – Another one for Nigel to make when we got home.

We left after three and drove north a couple of miles to Warkworth Castle – we didn’t go in as it was getting late but I did take a few photos as we drove around the car park – it is a handsome Castle. 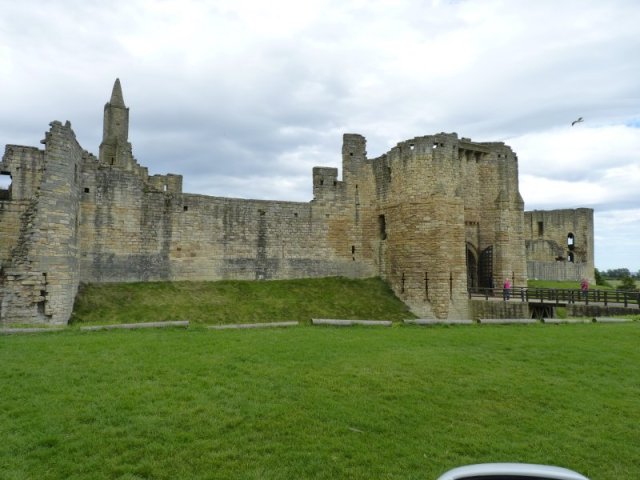 We didn’t take very long to get back to the Railway – it was still very full – there is a very yappy dog and a foreign couple opposite us. Nigel said she seems to be writing a diary like I do.

Meal tonight is lemon and herb fish with new potatoes and veg.

On the move again tomorrow moving a bit further south.